“LumaFusion completely transformed the way I work. But also, where and when I could work on my videos. At the end of the day, it left me with more time to explore and enjoy the journey.”

Angelo Chiacchio, filmmaker and creator of Ephemera - a mobile documentary about a disappearing world 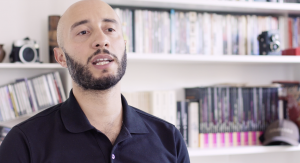 In 2018 Angelo Chiachio, a filmmaker set out from Italy to produce a documentary about the world we’re losing due to climate change and the rapid pace of technology advancement.

Seeking to travel light, Angelo opted to not carry heavy traditional filmmaking gear and instead went mobile. All of his gear fit into a small pack he cared with him to 30 of the world’s most endangered cultures. Many of these cultures and environments will likely not exist in the next 30 years due to environmental and social pressures.

Angelo shot with a traditional camera and then transferred his media from the SD card to a portable drive that generated its own wireless signal. That allowed LumaFusion to access his media on the drive and edit, even when there was no internet connection available.

Angelo’s work touched the Luma Touch team. We’re incredibly thankful for his contribution to mobile filmmaking and taking LumaFusion on his epic journey.