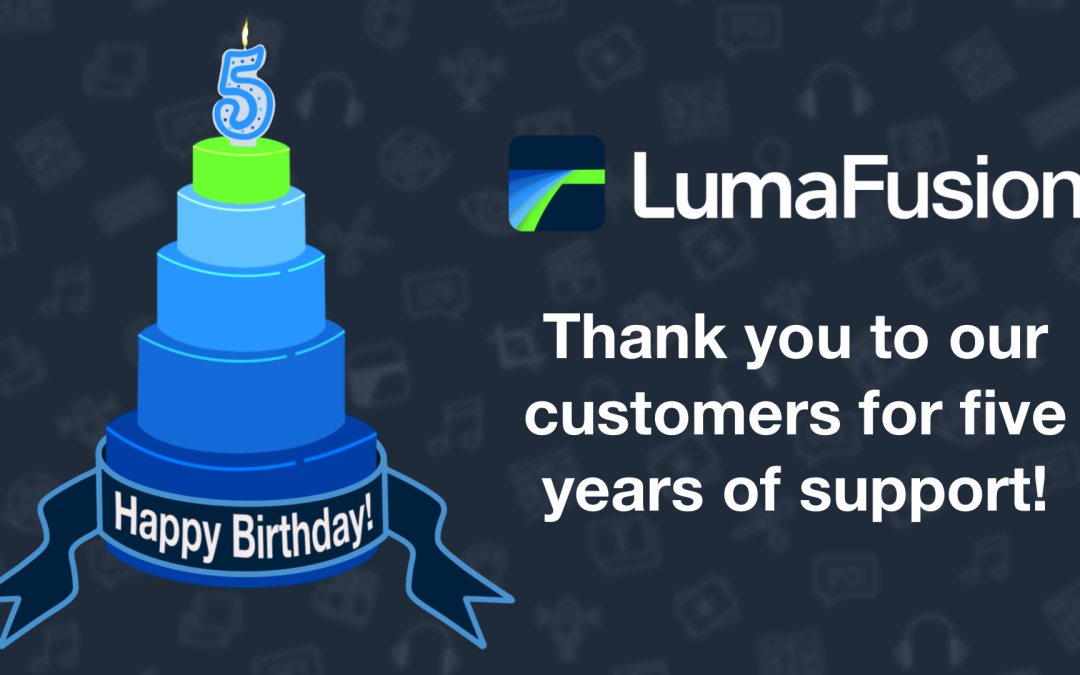 December 2021 marks five years since LumaFusion was first released to the App Store. Way back in 2016, the pro editing app had a mere three video and audio tracks and three additional audio-only tracks. It was also missing some critical features customers have come to love today. Fast forward to 2021, we’ve made over 14,000 changes to LumaFusion’s code resulting in countless new features and improvements including six video and audio tracks, plus six additional audio-only tracks, numerous in-app editors, and the ability to handle a large portion of customers’ editing needs from their first cut to final export.

Usage of LumaFusion has steadily increased over the past five years as well. What started as a handful of app sessions each day has grown to well over 35 million LumaFusion sessions per year, on 139,000 unique devices, with over 14.8 million exports to social media sites, cloud services, and other apps and devices. That’s an export every half second!

With so many people around the world looking to share their passions online, via social media, and directly with friends, it’s no surprise to us that video has become a fundamental part of how people express themselves and stay connected. We saw this idea underscored at the start of the global pandemic in 2020 when video went from being a nice-to-have part of life to a vital component of education, business, and just about every aspect of our daily lives. Today the need to create videos continues to grow as new and old editors alike look for ways to tell compelling stories.

As video editors ourselves we understand how impactful a crafted video can be to explore or honor a subject matter. Whether your project is about a product or process, expressing an opinion, or saying thank you to a friend, there’s no doubt that edited video provides a magical opportunity to be both spontaneous and curated at the same time!

LumaFusion continued to grow in popularity throughout 2021 with professional editors, content creators, and everyday folks who wanted to tell stories. It also attracted accolades from industry experts such as Apple, which awarded LumaFusion iPad App of the Year, and Videomaker magazine, which named the app the Best Enthusiast Video Editor.

At five we’re just beginning to hit our stride; there’s a lot on the horizon for LumaFusion customers to look forward to in the coming months. Earlier this year we announced several new features that will be coming soon. These include the long-awaited Multicam (which is the ability to quickly cut between multiple synchronized angles), Advanced Keyframing, Video Scopes (including waveform, vector scopes, and histograms), and much more. Additionally, we’ll be expanding LumaFusion to more editors around the world by making it available on Android and ChromeOS devices.

While we understand many customers need new LumaFusion features as soon as possible, creating a reliable, fun, useful, and exciting editing experience is our number one priority here at LumaTouch. With each new feature, we use Human-Centered Design and Agile processes to make sure the features our customers get with each update have been considerately designed, fully tested, and are not released a moment before they’re ready. So please bear with us as we prepare these new features for release.

We hope you continue to enjoy LumaFusion. The LumaTouch team looks forward to seeing what you create in 2022 and to provide you with tools that propel your storytelling to new heights.